Dollywood’s record-breaking wooden coaster was expected to shatter all expectations when it opened in April. The problem? It didn’t open until May, and then suffered from a series of issues with its launch system, causing it to shut down. Since then, Lightning Rod has been in and out of technical ride rehearsal, disappointing many enthusiasts who visited the park solely to catch a ride on the coaster. For me, this long summer of waiting proves that innovation comes at a cost.

What is innovation? The Merriam-Webster Dictionary defines it as the act or process of introducing new ideas, devices, or methods. For decades, members of the amusement industry have been competing to build the world’s most innovative roller coasters. Each of these record-breaking rides has shaped the way we think of the modern roller coaster.

The addition of Magnum XL-200 to Cedar Point in 1989 began an era now known as the “Roller Coaster Wars,” during which parks competed to create the world’s tallest, fastest, and longest steel coasters. Once the records reached a certain point, it became evident that they couldn’t go much further without becoming potentially dangerous due to intense G-forces, and many feared we’d reached the end of the era. 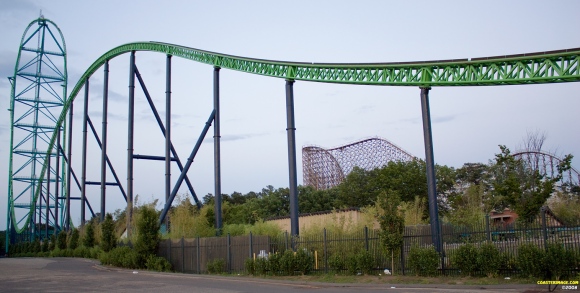 Then, having reached the limit, the industry turned its attention towards wooden roller coasters. For many years, wooden coasters fell without exception into a stereotypical category of rough, predictable, and non-inverting rides. When Son of Beast’s first-of-its-kind vertical loop in 2000 proved to be a disaster, it was only further “proof” that wooden coasters couldn’t go upside-down. But Rocky Mountain Construction’s creation of Outlaw Run in 2013 proved everyone wrong, featuring not one, but THREE inversions.

In 2015, the company came back with their latest big idea – a launched wooden coaster. Dollywood loved the idea, and shelled out $30 million for the ride, making it their biggest investment yet. But the launch mechanism, like most of the new ideas before it, didn’t have all the kinks worked out yet. It had never been done before, but Dollywood and Rocky Mountain Construction were willing to try it anyways for the sake of innovation.

That’s what innovation is – risking everything to make something new and exciting, more than your average coaster. It’s what Arrow Dynamics did with Magnum XL-200 when they created the world’s first 200-foot coaster. It’s what Intamin did when they built the world’s first launched coaster. And it’s what Rocky Mountain Construction did with the world’s first looping wooden coaster. Each ride, whether it immediately succeeded or not, made a huge leap forward in coaster design. Each had its risks and challenges, but the manufacturers overcame them and set a new benchmark for future rides to improve upon.

Lightning Rod is the same way. Though it might be disappointing that it didn’t open on time, that’s totally okay. There’s always a risk of failure with each innovation, and I applaud Dollywood for taking that risk. Even if the ride is still closed when I visit the park next month, they have plenty of other rides to enjoy, and it will certainly be up and running in the future.

Innovation is great, and rides like Kingda Ka, and Top Thrill Dragster still suffer downtime because of the new technologies they incorporate that are still being fully understood.
The problem here isn’t really the downtime – it’s the hype and buzz the enthusiasts and parks themselves create – and can’t live up to.
This “secret hush-hush plan for next year” approach for announcements is what starts the dissapointment clock – which in turn leads to our frustration when they can’t provide the experience they advertised.
If the parks would just let the new attractions draw on their actual merit, we would have much happier guests and much fewer dissapointments.

I agree, much of the disappointment is probably from the long seasons of rumors, speculation, and anticipation that build up hype for an un-announced coaster. Having said that, as long as we’re able to handle the disappointment, bring on the hype! 😉

But the hype is artificial at best. Even now, parks are teasing and hinting as if they have a cure for cancer. “What’s in the shed”, “we are taking an axe to Mean Streak” and other announcements are treated like national security secrets – some are even leaked to the press in memos (Valraven).
I applaud parks like Busch Gardens Williamsburgh announcing their 2017 wooden coaster in detail so far in advance, and even letting the public vote on its official name.
Honestly, what’s the point to the secrecy in the first place? Is another park going to swoop in and one up them? That will happen the following year anyway – and could be easily written into a contract with the manufacturer to insure exclusivitity.

I think its more about marketing than secrecy honestly. They draw it out all season to get as many fans interested as they can before they make the big announcement. #WhatsInTheShed was a great move by Kings Island in my opinion—some people might have thought it looks like a pretty typical GCI but the only way for them to find out “what’s in the shed” is to ride Mystic Timbers next year. I get what you’re saying, but parks have to stay in business somehow, and hype is their best friend when it comes to marketing their next coaster.

Riding it won’t be the only way to find out – as it will be all over the Internet after day 1 and hype is their worst enemy when it isn’t ready for prime time next year.
These “marketing guys” pull the old P. T. Barnum “hurry and see our new egress” ploy whenever it fails to work – or there is a mishap/accident. I wish they would apply the same effort in communicating what is actually wrong, and what they are going to do to fix it.
Perhaps the Schlitterbahn accident last weekend will lead to more transparency in the business end overall as it was “elected officials day”, and the boy was the son of a lawmaker.

I think there’s something in what you say and it would definitely benefit parks to communicate their problems and efforts to make them right. Dollywood has done very poorly at communicating the problems with Lightning Rod, instead making it worse by making everyone speculate what’s happening instead of knowing the truth.